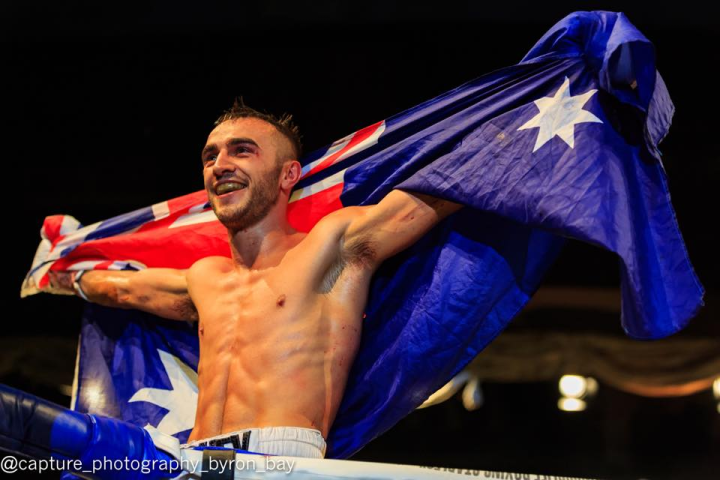 By Jake Donovan from Boxingscene.com and photos compliment of Tony Tolj.

An hour or so after watching his twin brother settle for a stoppage win versus an opponent who all but refused to fight back, Jason Moloney decided to up the ante.
His aggression reaped dividends, delivering a crowd-pleasing third round knockout of Goodluck Mrema in their ESPN+-streamed main event Saturday evening in Tweed Heads, New South Wales, Australia.
A left hook to the chin did the trick, putting Mrema down and functionally out at 2:23 of round three.
Whereas twin brother Andrew was saddled with a late replacement who wouldn’t fight back earlier in the evening, Jason Moloney found an opponent who was available for the taking. Mrema stepped in on barely one week’s notice, replacing Mexico’s Cesar Ramirez who was removed from the show for undisclosed reasons.

The 24-year old is a stablemate of Selemani Bangaiza, who offered little in his stoppage loss to Andrew in the evening’s co-feature. Mrema showed more resistance, at least in the opening round as Moloney was at least made to work relatively harder for his second straight win.
“He came to fight, he came to push me a little bit,” Moloney said of his visiting foe, who remains winless on the road as all five of his career losses have come outside of his native Tanzania.
The latest result was Mrema’s third stoppage losses in his last four fights. After tasting Moloney’s power early, he slowed down whatever offense he managed to provide in employing a more defensive strategy. The lack of return firepower was his undoing, as Moloney remain poised in his pursuit.
It led to a clean opening, as Moloney uncorked a perfectly executed left hook to the point of Mrema’s chin. It was enough to put the squat bantamweight down for the bout’s lone knockdown. Referee Justin Kennedy began his count before realizing there wasn’t a need to allow the bout to continue.
Moloney improves to 19-1 (16KOs), scoring his second straight win after a heartbreaking and narrow points loss to then-unbeaten titlist Emmanuel Rodriguez last October in Orlando, Fla. The 12-round thriller came in the opening leg of the World Boxing Super Series bantamweight tournament, with Rodriguez ultimately being shown the exit in the semifinals after suffering a 2nd round knockout loss to Naoya Inoue this past May.
The win netted Inoue the International Boxing Federation (IBF) bantamweight title, thus forcing him to relinquish his secondary version of the World Boxing Association (WBA) title as sanctioning bodies do not permit unification bouts between the different classes of belts.
Saturday’s card marked the first for both Moloney twins since signing a co-promotional pact with Top Rank. Both have indicated the likelihood of their next respective fights taking place in the United States, as Andrew is next in line for a shot at the winner of the June 29 clash between 115-pound titlist Kal Yafai and mandatory challenger Norbelto Jimenez.
As Inoue will collide with full WBA titlist Nonito Donaire in the tournament finals, the hope on Moloney’s end is to be in a position to challenge the winner early in 2020—and in the meantime to join his twin brother in next challenging for a major title.
“We’re ready to take on anyone in the division,” insists Moloney. “The WBA title has just become vacant, I want to fight the number one contender, Liborio Solis and we’re ready to make that fight happen.”